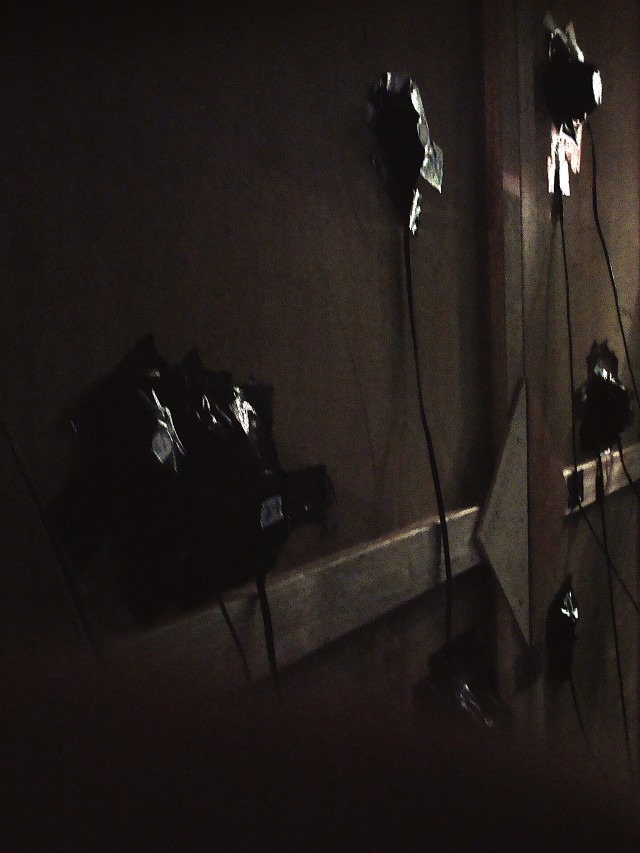 Sounding body was presented at Waapa’s KK Gallery earlier this year.  you can view the invite here.

The project “Sounding Body” was presented as part of the artist’s current engagement with sound in the life sciences.  It was performed on the night of 19 June 2010, along with other performances by Tasmanian sound artist Matt Warren, and Perth based composers Cat Hope and Lindsey Vickery at the Kurongkurl Katitjin gallery in Edith Cowan University.  In it, a bare white wall was placed flushed against the walls of the gallery, its understated positioning accentuated by dim lighting.  Speakers were attached to the wall and visitors were invited to put on stethoscopes to explore the sounds that were being transmitted and filtered through the wooden panels.  The piece ran for approximately 30minutes and featured long drones mixed into the acoustic body, as well as a section of feedback through 6 attached piezo contact microphones.

Whilst thinking about the ways in which technology mediates our perception, and in particular the ways in which the (hypothetically) pure sound is constantly filtered before reaching the cochlea, I started thinking about how stethoscope mediates the interaction of doctors and patients, and about the frequencies that are lost/filtered through the contact diaphragm of the stethoscope head.  This subject constantly arises in the discussions of phonographers/acoustic ecologists in their attempts to recreate succinctly the stereoscopic spaces that they experience.  Mediation through field recorders, digital effects units and even basic choices like where to position each microphone count for important changes in fidelity and stereo imaging of the final recording.  This (occupational) necessity for accuracy represented for me the problematic in dealing with the body’s internal soundscape, highlighting the metaphor of the stethoscope as a field recorder.

The original idea was a composition that amplified the lower frequencies and abstracted some of the higher frequency swooshes that could be recorded from the lungs and gut; but far from being original, this was something that many performers had attempted in the past, some even ingesting contact microphones to landmark the journey through the digestive track (ill find a link for that soon).  But whilst speaking to Dr Cat Hope at WAAPA, we started talking about the ways in which we could conceptually extend the idea of performative sound beyond just listening with the ears and more through infrasound, bone conduction and the like.  She introduced me to Seth Kim-Cohen’s “In the Blink of an Ear: towards a non-cochlear sonic art” which i lapped up and found a little inspiration in the chapter at the end of the book:

You can’t have a window without a wall.  To conceive of passage from one space to another, it is first necessary to imagine what stands between them. (Kim-Cohen, 213)

I started to think about resistances to using the stethoscope as field recorder, or field listener, bringing me back to an article I was reading intently before beginning the project entitled “Mediate Auscultation, the Stethoscope, and the “Autopsy of the Living” : Medicine’s Acoustic Culture”by Jonathan Sterne in 2001.  This article basically frames the historical and cultural significance of the stethoscope discussing the technological innovations of Laennec to an introduction of Josef Skoda’s semiotics of sound.  Gradually i decided that the emphasis would be  on the experience of listening to a performance through the stethoscope, allowing the technology to guide the composition as well as direct the interaction of the audience.

While using the stethoscope as a listening device is superficially simple (all it takes is to place the stethoscope head on a sound source and you’re good to go), the stethoscope as symbol embodies a latent history of medical culture and the politics of interaction between doctor and patient; and as technology, has gone from immediate auscultation (listening to the body with the ear pressed against the chest), through monoaural tubes, and finally to the current binaural model.  Our experience of the stethoscope in the past (unless you’re a doctor) also frames the technology in a Foucauldian power struggle of knowledge, making it an interestingly sinister experience owning or holding one.  All this could and did lend much to the presentation of the piece.

One of the main points of stethoscopic culture that interested me was that fidelity was just the means to a final goal which was in recognition/interpretation of the sonic event, and as such listening through the stethoscope was not, and could not philosophically provide the means to an appreciation of the internal soundscape – one that encouraged spatial immersion and dislocation.  Mediate auscultation also practically was about the location of sonic events like the heart beat, or the whoosh; but listening in that sense felt like i was truncating the notion of a spatial and continuous flow of resonance, much like extracting a temporal recording from a space.  To subvert that, i decided i would create an ambient piece which had very subtle changes but was engaging enough have people listen to it for a certain duration and achieve the feeling that it had no beginning nor end.

Another point of entry into the piece, was Laennec’s description of the stethoscope as a tool that ironically distanced the doctor and the patient during examination, for fears of contamination and also to prevent the socially inappropriate action of laying an ear on a woman’s chest.  (Foucault (1973) calls the stethoscope “the measure of a prohibition transformed into disgust, and a material obstacle” ).  This idea of distance was totally reversed in the installation performance, as the listening process was incumbent on a move towards the sounding body, and on the agency of the listener as engineer mixing the sounds that were played through different parts of the wall.  If anything, the installation brought people closer to the sounds, and even inward, as the stethoscope presented a very acoustically isolated experience of the wall, and even though people were right next to each other, they would experience each other  as voyeuristic surveyors within the performative space, tracking the grating of each other’s stethoscopes on the wall.  Some mentioned after that this was one of the most interesting sounds they found.

So here are some photographs of the performance.  apologies for the bad rendering but you get an idea of the light in the space (add subtle hum in the resonating wall) 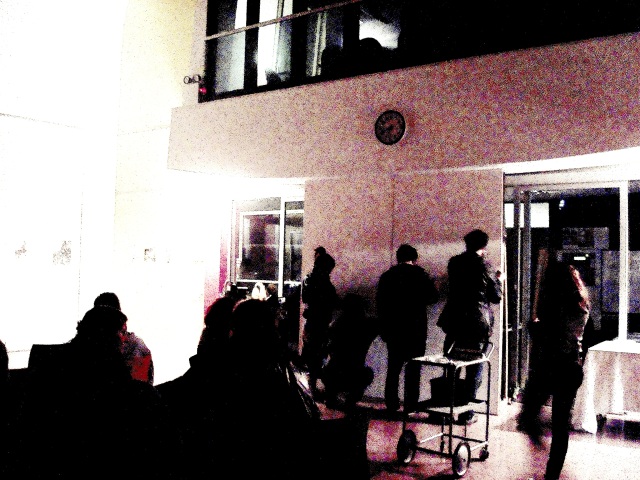 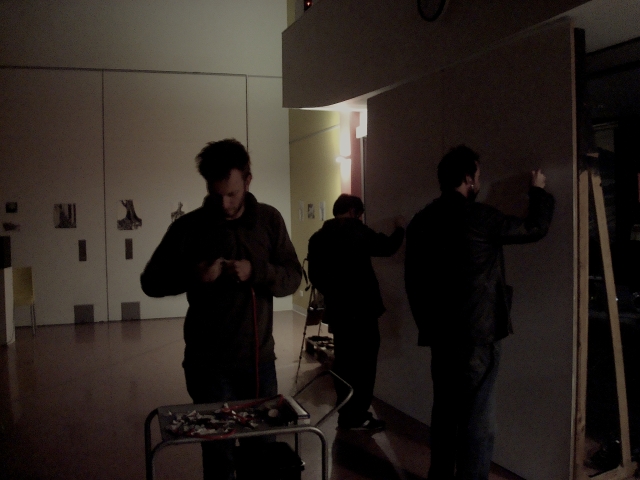 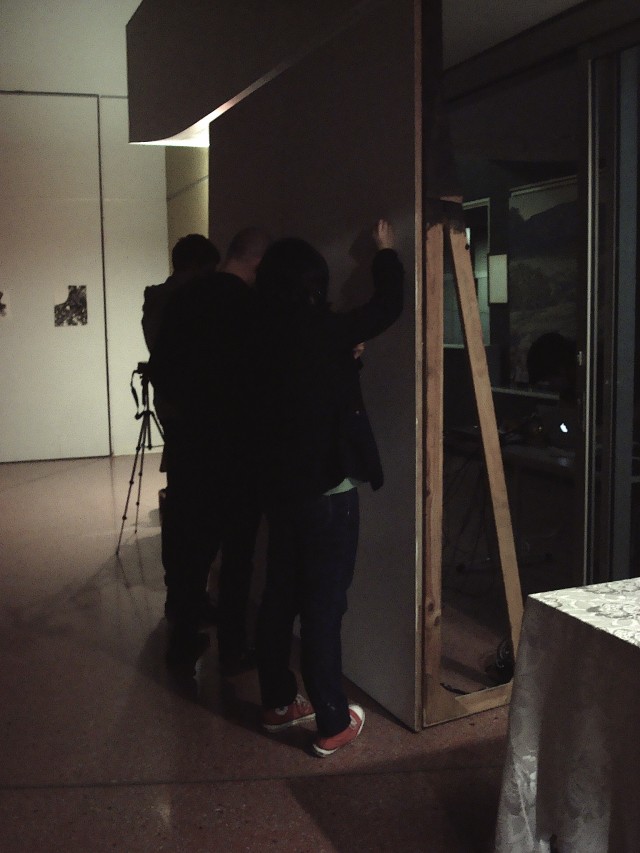 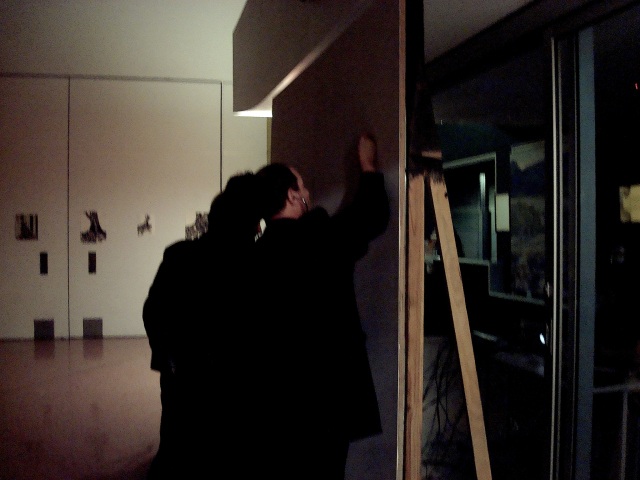 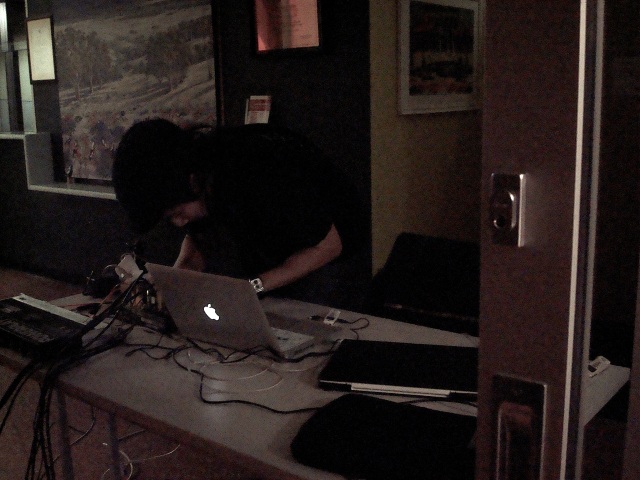