SO here i am after such a long break writing again on the blog… its not that i’ve given up the pursuits of an entirely exhibitionist worldwideweb journey (we all have facebook dont we), nor have i lost my voice in the cacophony of sound both in the city and out of, i’ve just decided to take a break.  ANd heres the video that pulled me out of retirement.

I think that this is an amazing work of art.  Not only for content, but also for form and structure.  The artistic direction by Liubo Borrisov is as captivating as the subject, and boasts an almost musical, melodic sublime, even when the performance itself threatens at times to subvert it’s very own classical convention.

Kimura’s work is  an interesting exploration into a work of art that incorporates sound and synthesis, but also one that features human and robot.  And amazingly, the sound made by the robot is not only believable, it is also as tactile, and dare i say as expressive as the violinist’s.  The machine’s apparent fragility adds to the idea of musical collaboration as a tenuous dialectic of power and dominance, even as its forceful life-sized faders jump violently to different points of the scale.  The picture is a beautifully ironic aesthetic that would bring a smile to the face of any engineer who believes in the life of artificial intelligence, the Ajay Kapoors.. and other urban machine music researchers…. but for me, its just the sheer purity of improvisation at its best and most interesting.

did i also mention that part of Kimura’s work involves using sub-harmonic frequencies.. a whole octave below the violin’s frequency range (down to those of the cello’s) that continue to defy physics and baffle scientists studying the phenomenon 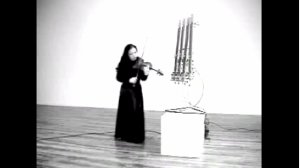 Kimura and robot in conversation

← NIN tours *where? Canada this summer
Trimpin on the big screen? →